We would like that the use of our website to be comfortable for you. To this end, we do our best to adjust the content available on this website to your interests and preferences. This is possible due to storage of cookies in your browser and processing by Panattoni Development Europe Sp. z o.o. (administrator) of personal data for analytical and statistical purposes. By continuing to use our site, without changing the privacy settings, you agree to the storage of cookies on your device and the use of information stored in it. Remember that you can always disable the option to save cookies in your browser settings and obtain additional information about the processing of your personal data and your rights in our Privacy policy .
July 18, 2019, 10:27 a.m.

Panattoni Park Lublin II with 84,500 sqm gets underway - the project worth PLN 130 million has its first tenant: Varroc Lighting Systems 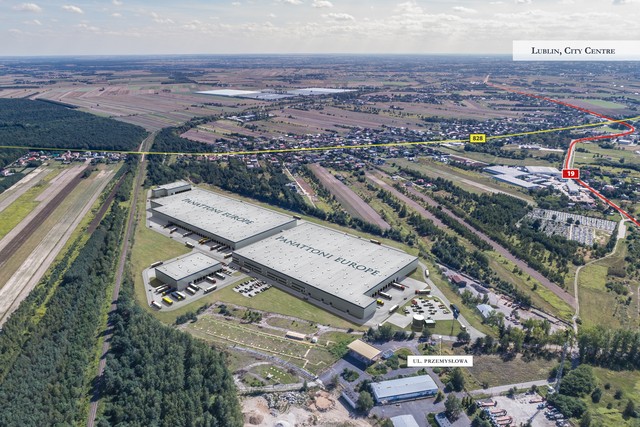 Panattoni Europe, industrial real estate leader in Europe, invests in Eastern Poland. The developer has already created its second distribution centre in the Lublin region – Panattoni Park Lublin II featuring more than 84,500 sqm at full build-out. Its first tenant is an automotive enterprise – Varroc Lighting Systems, which will be opening a factory on the leased 25,000 sqm.

PLN 130 million for Panattoni Park Lublin II. Following the success of the first park in Lublin – the largest warehousing complex in the east of Poland (with 70,000 sqm in three buildings), Panattoni Europe continues to invest here, providing nearly 135,500 sqm of modern industrial space in total. The developer is working on Panattoni Park Lublin II, worth PLN 130 million and designed to total 84,500 sqm. The project will comprise three buildings and has already secured its first tenant. It is Varroc Lighting Systems – a leading manufacturer of next-generation external lighting systems and vehicle control electronics for the automotive industry. The company has leased more than 25,270 sqm in the developer’s latest project, which they will use as a manufacturing plant. It is going to be the Varroc’s second location in Poland, joining the company’s Engineering Center in Krakow plant in Poland and the twelfth worldwide. It is expected to create about 350 jobs.

“This new manufacturing plant continues the expansion of our global engineering and production capabilities,” said Kristijan Fiket, Varroc Lighting Systems Vice President of Varroc Lighting Systems’ European Business Unit. “Our facilities in Poland, along with our locations in Bulgaria, Czech Republic, Morocco, Romania, and Turkey create a robust and cost-competitive footprint to serve our European customers.”

Panattoni Europe is the first developer of industrial space to recognise the potential of smaller municipalities, including Lublin – the biggest city in eastern Poland, capital of the Lublin voivodeship with a population in excess of 2.1 million. “As a result, the region has a sizeable internal market, and its nine schools of higher education guarantee access to a qualified labour pool, which did not go unnoticed by Varroc” comments Dorota Jagodzińska-Sasson, Managing Director at Panattoni Europe, adding: “The region is also increasingly well communicated with other parts of the country thanks to the developing rail and road transport network, and together with Lublin constitutes the gate from the European Union to the East. Operating and labour costs that are 20-30 per cent lower than in Central and Western Poland also help strengthen the competitive edge of this market, as does the support of regional investor relations offices and local authorities”.

Panattoni Park Lublin II is situated in the Niemce commune, 8 km from the Lublin bypass and close to the S19 expressway and the planned north-south route – Via Carpathia. It will run along the entire length of Europe’s eastern border, connecting Eastern Poland and remote regions, such as Białystok and Rzeszów. The closest junction on that road is planned just 500m from the park.

LPP, the largest clothing group in Central and ...

Panattoni in the bike charity ride to the EXPO ...