We would like that the use of our website to be comfortable for you. To this end, we do our best to adjust the content available on this website to your interests and preferences. This is possible due to storage of cookies in your browser and processing by Panattoni Development Europe Sp. z o.o. (administrator) of personal data for analytical and statistical purposes. By continuing to use our site, without changing the privacy settings, you agree to the storage of cookies on your device and the use of information stored in it. Remember that you can always disable the option to save cookies in your browser settings and obtain additional information about the processing of your personal data and your rights in our Privacy policy .
Sept. 9, 2021, 3:38 p.m. 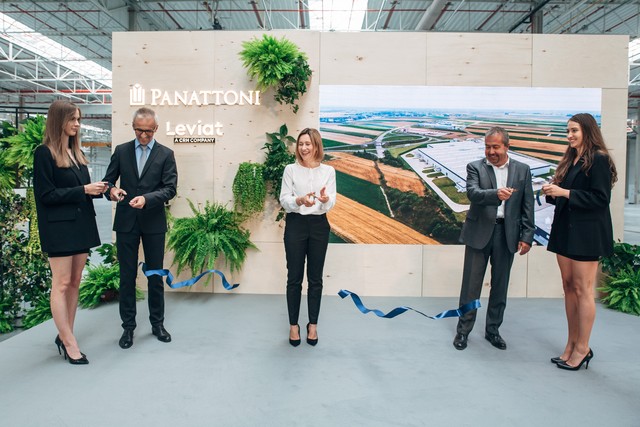 European industrial market leader Panattoni has completed a factory in Kalisz for Leviat – a global specialist in innovative solutions for the construction sector. The 40,000-square-metre investment replaces the company’s existing plant in the central Poland city. As a result, it will increase its production capacity and will be able expand its activities. One of the main challenges involved in developing the plant was to carry out the project within the strict time frame needed to ensure the continuity of the firm’s production.

A short step to relocate, but with long-term prospects. Panattoni has completed the construction of a 40,000 sqm production plant for Leviat – a global provider of innovative solutions for the industrial and construction sectors, which operates in 60 locations around the world. In its new facility, the company will manufacture a wide range of fasteners for the construction industry. The project has been built in Kalisz, just 5 km from the firm’s existing factory in Nowe Skalmierzyce. The short distance to the new larger facility will allow the firm to continue to employ the services of its qualified team of 350 professionals, while leaving open the option of further expansion. At the same time, Leviat will be able to increase its production capacity and, to a greater extent, use the potential of its existing tech and equipment to ensure that the company continues to grow.

“The excellent cooperation and mutual understanding we have had with Leviat has allowed us to not only deliver a facility that meets its requirements, but also to complete the project on time to ensure the continuity of its production. This cooperation allowed us the efficiency we needed to finish the project on time, despite all the pandemic-related restrictions” explains Marek Foryński, BTS Managing Director, Panattoni.

Around 36,500 sqm of Leviat’s new plant in Kalisz is to be used for technologically advanced production processes, in order to produce, among others, assembly, reinforcement and transport systems. The modern social and office space will take up 3,500 sqm of the facility, which has been developed in a sustainable manner and is to be BREEAM certified.

The oldest city in Poland with the most modern business prospects. Leviat has decided to stay in the Kalisz area – as this is not only the second largest city in Wielkopolski province, but a city whose business potential continues to grow. As Mariusz Mucha, Managing Director, Leviat, points out: “The choice of this location was no accident. It allowed our current team of around 350 specialists to be employed in the new factory – and we very keen on this happening from the outset. Kalisz is also the second largest city in the Wielkopolska province, which in recent years has also become an important and dynamic academic centre with an excellent labour market. Thanks to all this we have been able to achieve our main goal – increasing our production capacity and, if necessary, taking on more people.”

The city offers almost 60 ha of land for development as well as a huge human resources pool – almost 350,000 people live in the Kalisz-Ostrowska conurbation. Moreover, Kalisz lies in the middle of the Wrocław-Poznań-Łódź triangle – three of the key logistics cities in Poland. Its well-developed infrastructure, expertly prepared development sites, and the accommodating approach of Kalisz’s city authorities, have shown that Leviat’s decision to stay in the region and expand in Wielkopolska’s second largest city is totally justified.

In the beginning there was Panattoni. The project for Leviat is not the developer’s only first project in Wielkopolska’s second largest city. In April, the company completed the first, 11,000 sqm stage of Panattoni Park Kalisz, which will eventually offer 35,000 sqm, and has thus delivered the first class-A warehousing space in the area. The project is being developed as a small business unit (SBU) facility, with the smallest modules having an area of ​​1,380 sqm. The space can be adapted for both logistics and production purposes. Panattoni Park Kalisz, upon its completion, will bring the space the developer has built in the Wielkopolska region up to more than 1.1 million sqm.

Panattoni partners with Carrefour for the thir...