We would like that the use of our website to be comfortable for you. To this end, we do our best to adjust the content available on this website to your interests and preferences. This is possible due to storage of cookies in your browser and processing by Panattoni Development Europe Sp. z o.o. (administrator) of personal data for analytical and statistical purposes. By continuing to use our site, without changing the privacy settings, you agree to the storage of cookies on your device and the use of information stored in it. Remember that you can always disable the option to save cookies in your browser settings and obtain additional information about the processing of your personal data and your rights in our Privacy policy .
Nov. 4, 2021, 10:50 a.m. 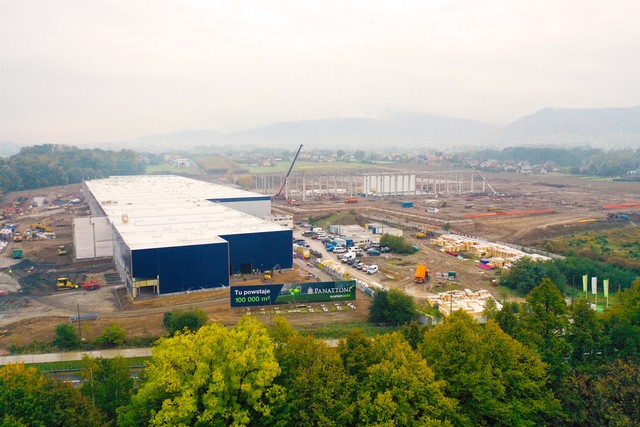 European industrial market leader Panattoni is completing another development for the automotive industry in Bielsko-Biała. As part of Panattoni Park Bielsko-Biała IV, the developer is to deliver a BTS production centre with an area of 33,200 sqm to the Italian-based Cornaglia Group – a producer of components for the automotive industry, as well as construction and farm equipment and other machinery. The company is growing its business in Poland and the Panattoni development will allow it to expand its activities in one location. The building is to be completed in January 2022, but already at the end of this year, the fit-out of a modern and highly specialised production line will begin.

To meet the scale of European motoring. Bielsko-Biała is an area that continues to develop with several new investments. The automotive industry, due to its numerous developments, is one of the driving forces behind this and Panattoni is backing its growth in the region. Currently, the developer is constructing a BTS production centre with an area of 32,200 sqm as part of Panattoni Park Bielsko-Biała IV for the Cornaglia Group – a leading European supplier of technology and components, including for the automotive industry – a company that employs 1,000 people in total. The centre is to be opened in January 2022. The development of the factory will allow the company’s operations in Poland to be moved to a new location and will allow the company to increase its production capacity and extend its machine park with the latest generation of equipment. This will result in production being increased and in new customers in Europe being won over.

“Outside Italy, the Cornaglia Group has production centres in three other European countries, which includes in Poland. The Bielsko-Biała factory is of strategic importance to manufacturing and trade with both current and potential customers in Europe, which only underscores how prestigious the project is. We are pleased that our ability to create bespoke buildings has once again been recognised by an international company. Moreover, once again a company that serves the automotive industry has chosen Panattoni, which shows that we make a superb partner for this sector and our experience and possibilities grow with every project,” says Aurelia Rachtan, Senior Development Manager from Panattoni.

Among the activities undertaken to prepare for the operations of the Cornaglia Poland factory, Panattoni dug out a large area that went down 7 metres to prepare the foundations for the tenants’ metal presses. It is also to support the company in transporting and fitting a piece of production equipment that weighs over 100 tons, which is to arrive at the Polish factory from Italy. To gain the maximum effect from the pressings, Cornalgia Poland is to make use of advanced equipment. The new line will be able to produce parts from both aluminium and steel.

Panattoni Park Bielsko-Biała IV, where the Cornaglia BTS factory is being developed, is under construction next to the future S1 expressway, which in the stretch under construction between Mysłowice and Bielsko-Biała is to be part of the international route between Gdańsk and Vienna. Moreover, the road will provide direct access to the A1 motorway and the Slovakian border at Zwardoń. Panattoni Park Bielsko Biała IV is ideally placed in regard to the Upper Silesian urban area as well as to Kraków, which makes hiring highly qualified workers significantly easier.